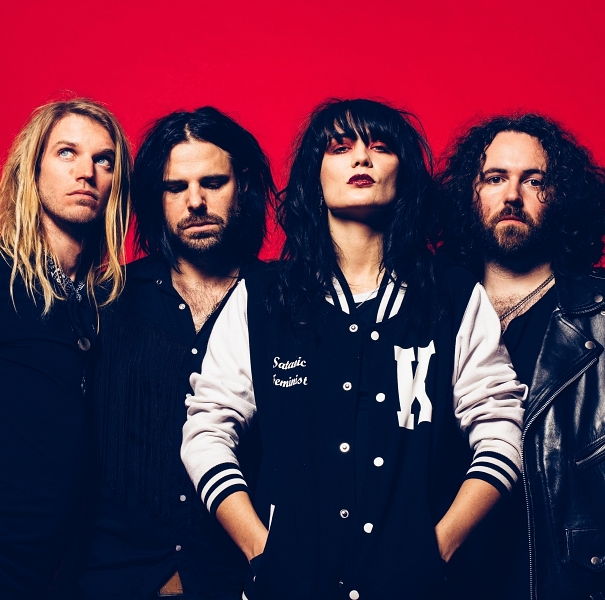 Saint Agnes are a ferocious 4-piece rock band from East London who clocked up over 200 divebar and squat shows across the UK & Europe in their first 3 years. 2018 was their breakout year; smashing up the mainstage at Kendal Calling, a raucous 20 date UK headline tour, festival appearances across Europe and a sold out headline show at the legendary Lexington in London.

Their year finished with a UK and European tour this autumn, heading out for 6 dates in Germany including Reeperbahn Festival and their biggest headliner yet at The Borderline in London in support of their then recently announced 12" vinyl EP 'The Death or Glory Gang' released via InGrooves(Wolf Alice, Pale Waves).

They are unashamedly a rock band, playing fiery live shows hinging on the intense chemistry between frontman/woman duo of Kitty Arabella Austen and Jon James Tufnell. Their recordings are fully analogue and self-produced to capture the true rebel heart and energy of the band.This is modern guitar music made in the most authentic way. Recording sessions were engineered by Luke Oldfield (The Wytches, Uncle Acid & The Deadbeats).

In 2019 Saint Agnes release their debut full length collection of tracks on May 3rd entitled" Welcome To Silvertown" via new label partner InGrooves backed by over 30 summer gigs Europe-wide before October passes.

They have had radio play from: BBC Radio 6 (Lamacq), Virgin (Georgie Rogers), KEXP, Radio X and Amazing Radio. John Kennedy invited the band to record a live session on his show as well as perform at his own showcase event.

"Saint Agnes kick out the jams with a fervour and sense of purpose that's genuinely refreshing by shoving the blues through a mangle of 70s influenced psych and metal and then spewing them out in a multi-coloured spray." - The Quietus