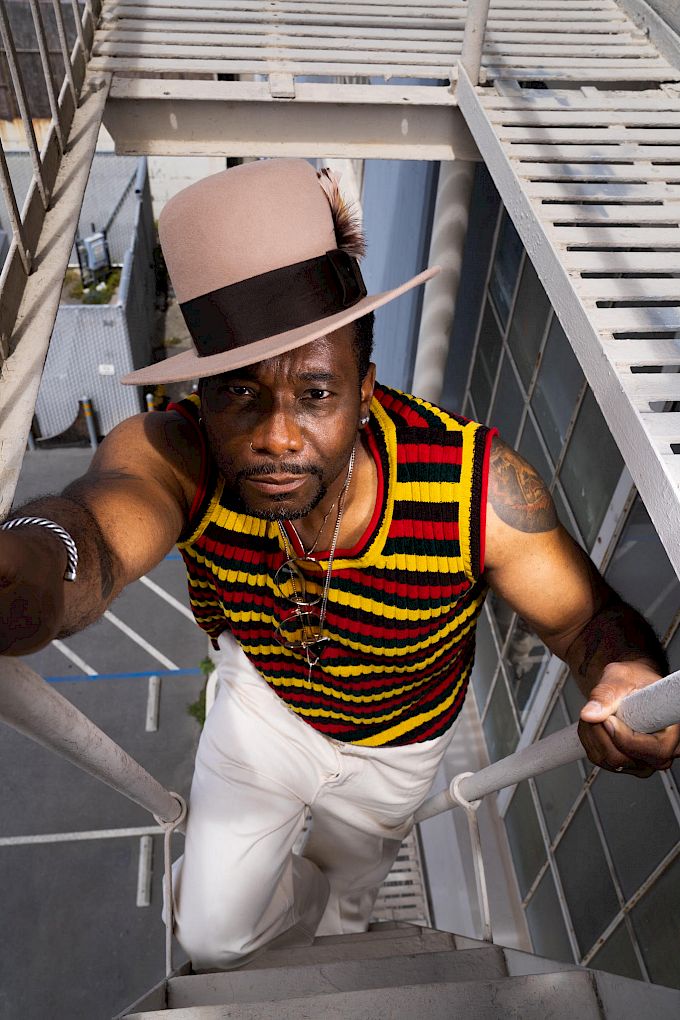 Martin Luther McCoy was born in San Francisco, California. A summer child who bathed in the sweet soul music of the seventies andfound himself a Bill Withers and Sam Cooke fan before being properly introduced to the electrifying perennial funk mob, Parliament Funkadelic. A life long student of music, Martin began writing songs as early as age 6 and would rearrange the gospel songs he learned in church. The influence of San Francisco’s cultural melting pot allowed him to gain a great appreciation for the tenants ofclassic jazz, rock and roll and soul music even though his neighborhood friends urged him to pursue hip hop and urban R&B. His voice is anointed with the ethers of the gospel church, but his pen speaks to sinners and saints alike.

Martin started releasing his own music with his debut “The Calling’’ in 1999 to critical acclaim. His sophomore release ‘’Rebel Soul Music’’ produced the hit “Daily Bread’’ and a video that made VH1’s top ten in 2005. For years he toured with the Roots and has made cameos in various films and TV shows. In 2007 he made his cinematic debut landing a starring role in the academy award nominated film “Across The Universe” where he performed the new definitive version of George Harrison’s/Beatles classic “While My Guitar Gently Weeps.”

Continuing to expand the reach of his independent label, Rebel Soul Records, "Extra Terrestrial Brother Vol 1" by ‘Martian Luther’ was released in September 2011, available only at his website and features rare glimpses of the creative life of this multi-talented singer and includes special guests like Tupac and George Clinton as well as a funked out cover of Nirvana’s "Heart Shaped Box". “This project is an intimate love letter from an artist to his fans, one made that much more generous by its name your own price Bandcamp pricing. Recorded while on the road with a collective of similar musical nomads in between hotel rooms and at friend’s studios, thealbum is a healing antidote.” (quote from Soultracks.com)

On "Love Is The Hero", there is an undeniable sense of compassion laced in the flow of the music. Martin finds more time for his guitar work with anthems like "American Gold" and the crowd-pleasing favorite, "I want you now". Forgoing the current trend of over-saturated synthetic pop, this body of work is dense with live musicianship, lyricism, melody and enough vigor to will the hearts oflisteners to greater things. “Everyone here knows love is the hero” Luther screams on the vamp of "Killer Machines". “This music is here to remind us of our greatness, our storied past and that we can move beyond any limitations.”( Rebel Soul Records™, LLC2016)

Fast forward to 2022 and Martin is Featured Vocalist in a new hip sports campaign with Stic of Dead Prez and Diadora sportswear. The song "Lace Up" is dropping with the new sneaker campaign this fall.

In addition, Martin is a full active member of the acclaimed SF Jazz Collective and since 2020 has appeared on both recent albums by the Collective and has toured extensively.