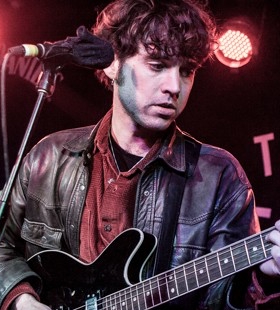 Euan Hinshelwood is a British songwriter, multi-instrumentalist, tape studio owner and producer based in Greenwich, London. His band Younghusband have been together for over ten years and are considered cult heroes, with both their 2011 debut album ‘Dromes’ and 2015 follow-up 'Dissolver' receiving critical acclaim by the international music press.

This summer, the band will release their third LP ‘Swimmers’ on 7 June 2019 via Opposite Number records. ‘Swimmers’ is awash with glowing guitar melodies, breezy pop moments and restrained yet potent songcraft. It looks to themes of open space and reflection, partly inspired by band’s move to their own studio in Greenwich, built by Euan in an old barn.

It’s a fresh approach taken for a record that oozes freshness from every note on it – a logical step from the busyness of their preceding album. When they released their second album, 2015’s Dissolver, it came with a string of impressive names attached to it. Released by ATP, produced by Loop’s Robert Hampson, recorded at Geoff Barrow’s Invada Studios and featuring Warren Ellis of Nick Cave & the Bad Seeds’ sprawling viola work. The result was an album that calmly shrugged off the neo-psych label that some lazily placed them in the wake of their 2013 debut album Dromes, a record that Mojo gushed about saying “It pushes bittersweet melodies from under a reverb rug.”

Euan has been a member of and played on the recordings for many successful British bands including Cate Le Bon, TOY, Meilyr Jones, Wesley Gonzalez, Drinks, Rose Elinor Dougall, and Emmy The Great.